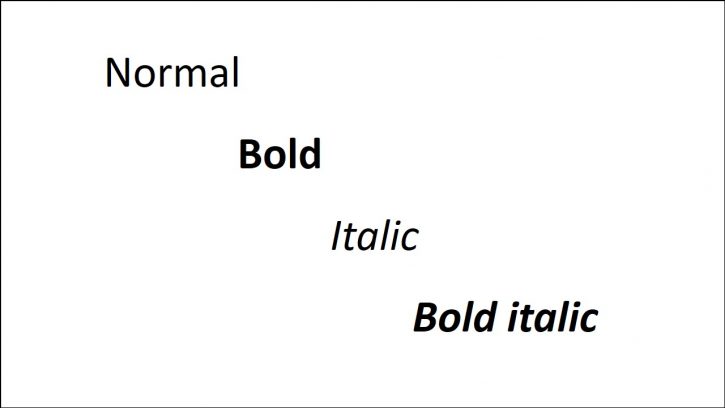 Amongst the numerous fonts that have been made available over time, the most vital font type is none other than the italic Font. Journals and websites are increasingly using italic fonts throughout their articles.

Their importance stems from the fact that they are utilized in emphasizing or even distinguishing words when you are writing a document. When used adequately, they are actually a highly effective way to assist the reader.

Though quite hard to imagine, before the emergence of computers, almost all documents or publications were written by hand. Some were handset with the use of the movable type of letterpress

Next came the mechanical typesetting as well as the phototypesetting. However, with a computer right now, it is very simple to create the italics that are in use. Meanwhile, italic Font is a type of font that is slightly slanted and used in setting texts apart.

It is often referred to as a style of a typeface. Although most writings are printed in Roman font, the italic Font is a unique font that slants a little bit to the right.

What this means is that a sentence or word that is written in italics stands apart from all other words in a given sentence. It is noticeably different.

It is vital to note that there may be different italic rules for different formatting styles, such as; MLA, Modern Language Association, and APA; American Psychological Association.

Although all of these are vital, all that truly matters is the chosen writing method, which is defined to be the style guide. An employer, organization, or school use it.

Nevertheless, no matter the style guide you make use of, you should actually be consistent. And, you should make use of the same rules all through the document.

More so, there are some universally accepted rules when it comes down to making use of italics. They include:

Generally, all titles are actually italicized. Included in this rule are the title of a book, magazine, newspaper, CD or album, etc. However, the short stories or articles, such as this one, cannot be italicized; neither can episodes in a television see be italicized.

These italic fonts are used in showing emphasis or contrast in a bid to highlight the vitality of a subject or a word.

However, you will have to be very careful when using italic fonts to contrast or make an emphasis. This is because people, such as teachers think that you should allow the reader to decide what is vital and not use italics for both emphasis and content.

Sounds that are reproduced as words

When you are writing out a sound and trying to reproduce as well, you should use italics. It is mostly done in those books for kids.

What you should note is that all the sounds are not italicized. Rather, it is only italicized when you are on the verge of demonstrating the sound.

Introduction of a term

Whenever a new term is being introduced in a scientific essay, it is only common to, first of all, write down the word in italics.

And, if readers should see a term in italics, they will immediately know that it is the first time the word is being used.

There may come a time when you will not be so sure of when to make use of italics; you can always refer to this article. We have listed some of the diverse categories where the italic Font can be used.

If your sentence falls under a category, you can make use of it but, if it does not, it is best to make use of the standard font.