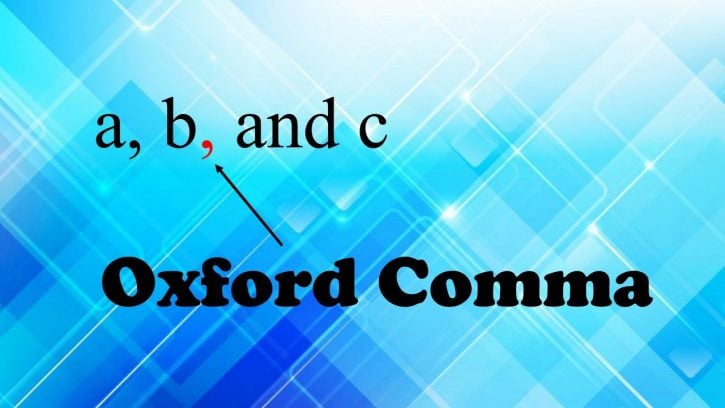 It is first of all important to know that the Oxford comma is the same sign as the regular comma we use. However, what makes the Oxford comma different is its usage. The Oxford comma, otherwise known as the serial comma is a linguistic device in the English language. As an editor at Grammarly correctly suggests, the Oxford comma to most people is simple, it’s either they don’t like them, or they do, or they simply do not understand when it should be used. (Where to use commas)

The comma that is placed right after the word “spoon” is the Oxford comma. The main function of the comma is to establish that the items mentioned are individual items. However, one might ask: the omission of the Oxford comma will still show that the aforementioned items are separate. The answer to this lies in another sentence:

I went out with John, Peter, and Andy to the Florence and the Machine concert.

In the sentence, the omission of the Oxford comma in the last bit of the sentence (Florence and the Machine) shows that it is a single entity, a single musical act, while the previously mentioned names are separate individuals.

(Do you need help with punctuation. We can help!)

When can you use the Oxford Comma?

As previously mentioned, an Oxford comma is used just right before the last item in a list of other items separated by a comma. However, journalists have always decided against using it, claiming it takes up space on a newspaper page, whose most important goal is to fill up each page with as much news as possible.

Also, most of us were taught in high school not to use it. However, it is grammatically correct as it comes from a renowned source, the Oxford University Press where writers and editors constantly use it.

Furthermore, Grammarly —  an online platform used to check and correct grammatical errors — supports the use of the Oxford comma and makes it a part of its grammar correction process.

In addition, it is important that you keep in mind who is going to read your work before you make use of the Oxford comma or not. For example, if you are submitting to the Associated Press, you can choose to use it or ignore it completely. Also, the AP and Chicago Style does not require you to use it, meaning you are at liberty to use or not. It is important to do or choose that which works for you.

However, you can use the Oxford comma when you see that its omission could lead to possible misinterpretation. In the event of this, you should make it a part of your writing. There is also another trick to avoiding using the Oxford comma altogether, and this is the rearrangement of your items. If the last two items are causing the statement to look ambiguous or misleading, re-arranging the sentences will do a great job.