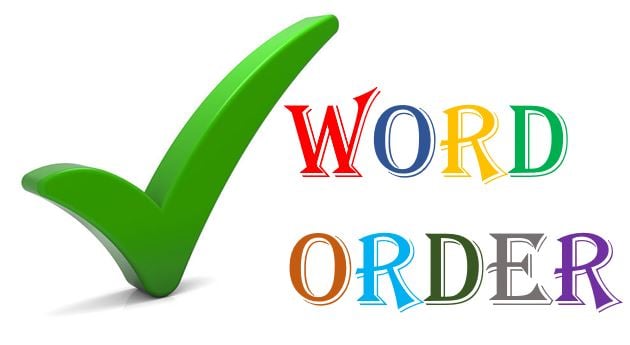 Normally, sentences in the English language take a simple form. However, there are times it would be a little complex. In these cases, the basic rules for how words appear in a sentence can help you.

Word order typically refers to the way the words in a sentence are arranged. In the English language, the order of words is important if you wish to accurately and effectively communicate your thoughts and ideas.

Although there are some exceptions to these rules, this article aims to outline some basic sentence structures that can be used as templates. Also, the article provides the rules for the ordering of adverbs and adjectives in English sentences.

For English sentences, the simple rule of thumb is that the subject should always come before the verb followed by the object. This rule is usually referred to as the SVO word order, and then most sentences must conform to this. However, it is essential to know that this rule only applies to sentences that have a subject, verb, and object.

She killed the rat

The following is an explanation and example of the most commonly used clause patterns in the English language.

The English word order is inverted in questions. The subject changes its place in a question. Also, English questions usually begin with a verb or a helping verb if the verb is complex.

Can you finish the assignment?

Did you go to work?

The dress was beautiful

Her voice was amazing

The father slapped his son

The teacher questioned his students

Sentences with transitive verbs can have a mixture of direct and indirect objects. Indirect objects are usually the receiver of the action or the audience of the direct object.

He gave the man a good job.

The singer gave the crowd a spectacular concert.

He gave a lot of money to the man

The singer gave a spectacular concert to the crowd.

Adverbs are phrases or words that modify or qualify a verb, adjective, or other adverbs. They typically provide information on the when, where, how, and why of an action. Adverbs are usually very difficult to place as they can be in different positions in a sentence. Changing the placement of an adverb in a sentence can change the meaning or emphasis of that sentence.

Therefore, adverbials should be placed as close as possible to the things they modify, generally before the verbs.

He hastily went to work.

He hurriedly ate his food.

However, if the verb is transitive, then the adverb should come after the transitive verb.

She spoke quietly in the class

John goes to work every morning

They arrived at school very late

On Sunday he is traveling home

Every evening James jogs around the block

When there is more than one verb in the sentence, the adverb should be placed after the first verb.

She has always loved eating rice.

Adjectives commonly refer to words that are used to describe someone or something. Adjectives can appear almost anywhere in the sentence.

Adjectives can sometimes appear after the verb to be

Adjectives can also appear before a noun.

However, some sentences can contain more than one adjective to describe something or someone. These adjectives have an order in which they can appear before a now. The order is

The ugly old woman is back

The dirty red car parked outside your house

When more than one adjective comes after a verb, it is usually connected by and

The room is dark and cold

Having said that, Susan is tall and big

Get an expert to perfect your paper

2 thoughts on “Word Order Rules in English – A Comprehensive Guide”